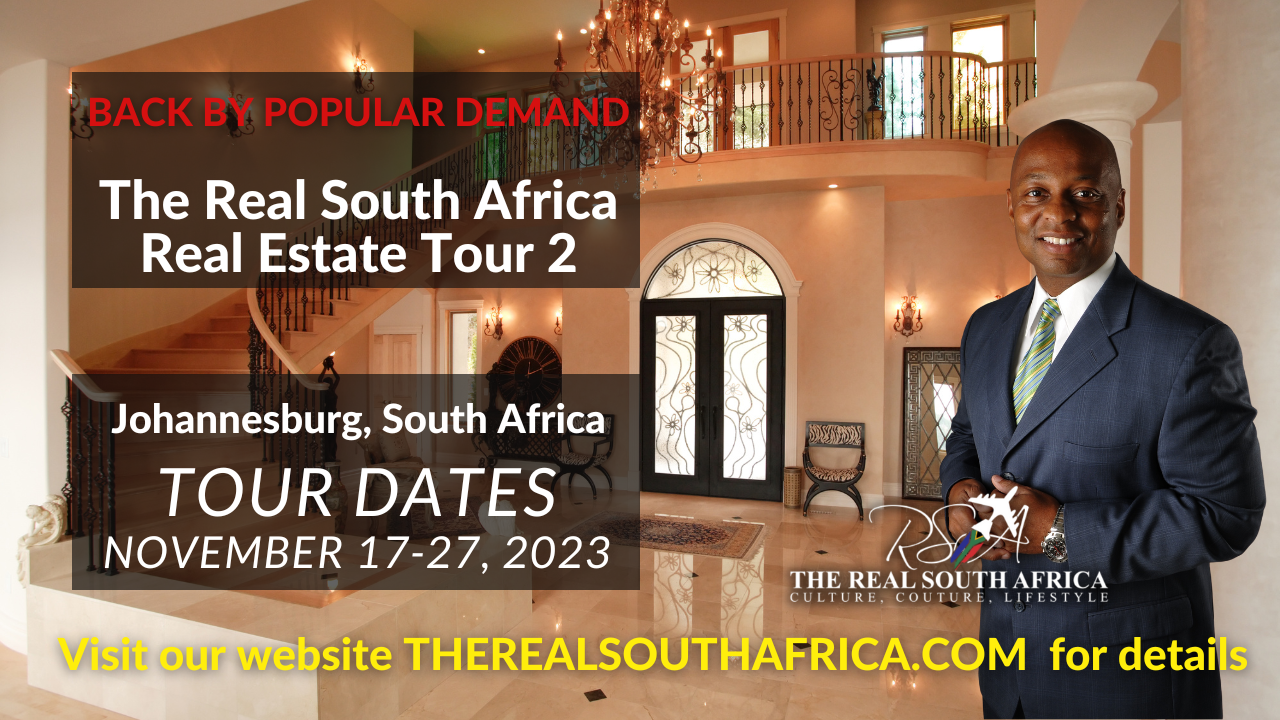 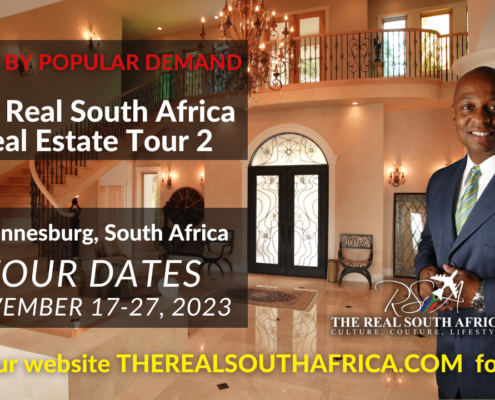 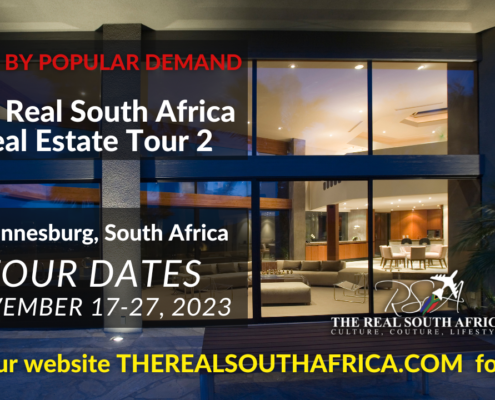 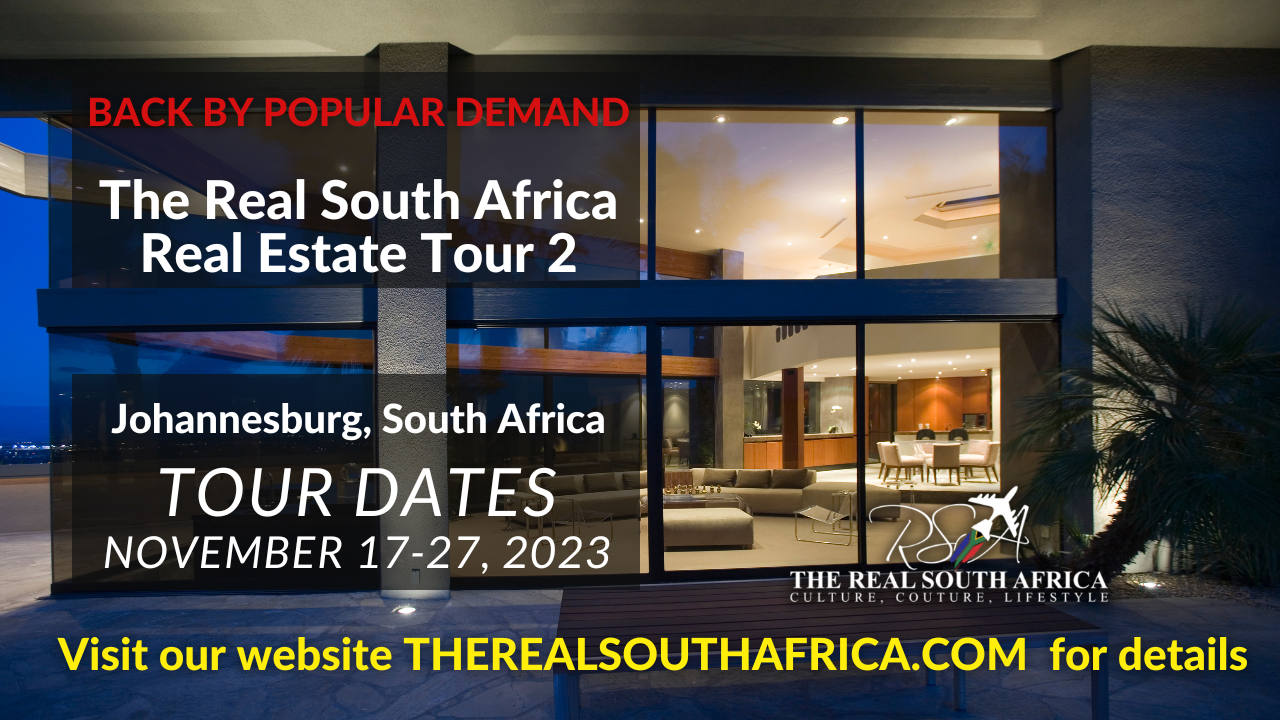 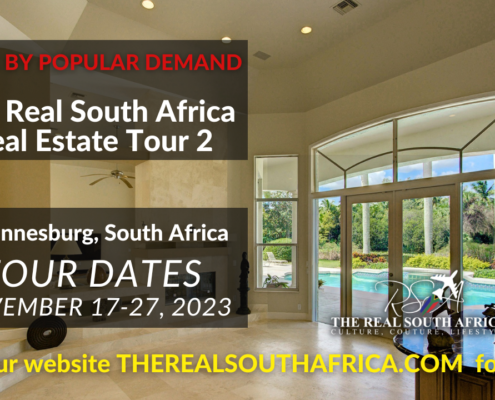 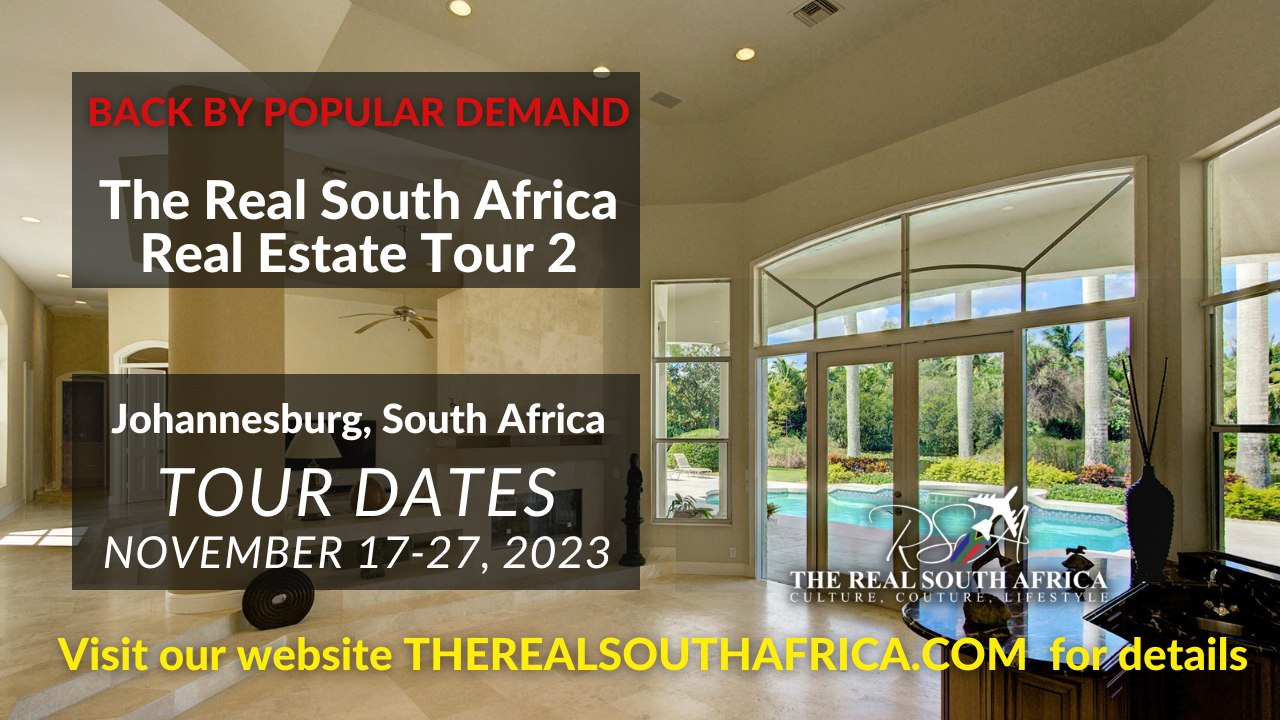 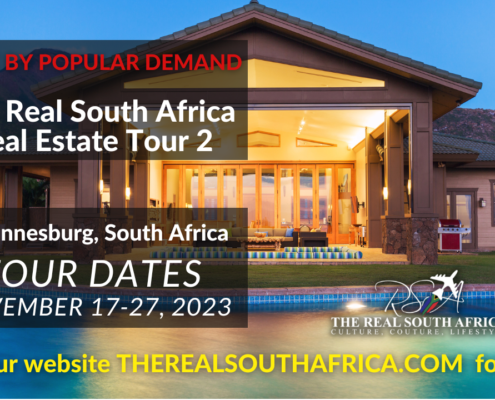 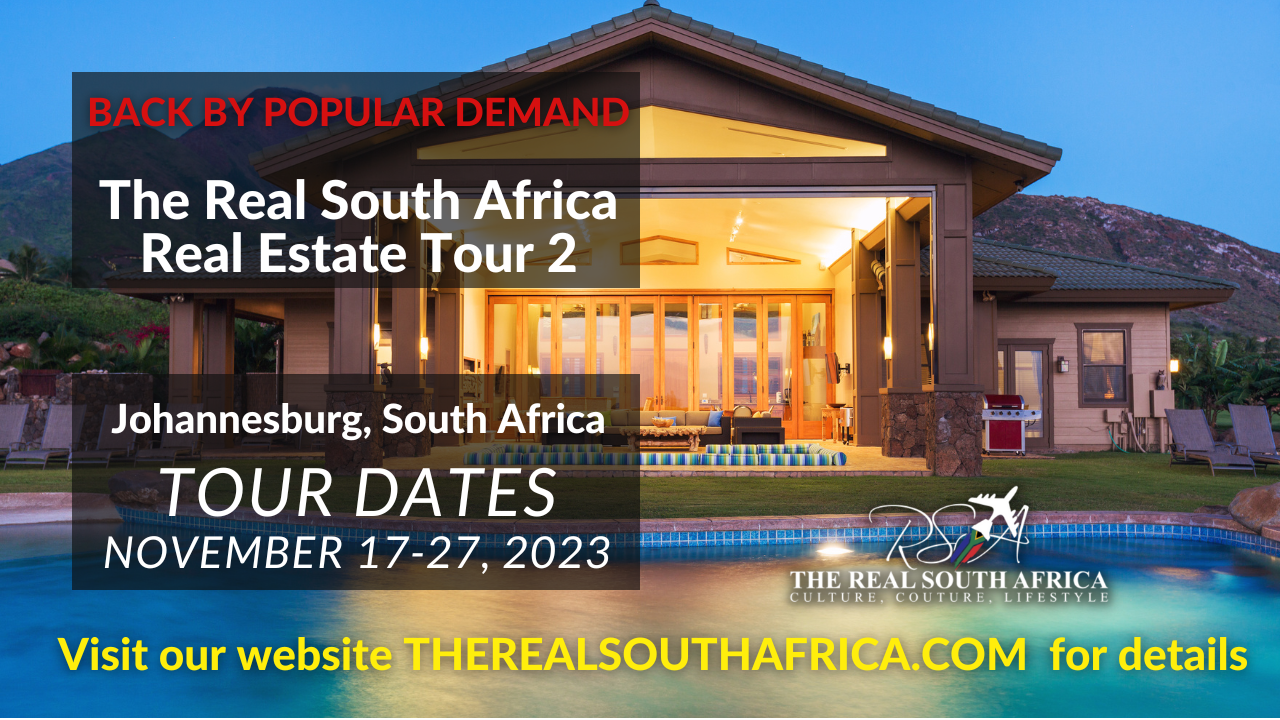 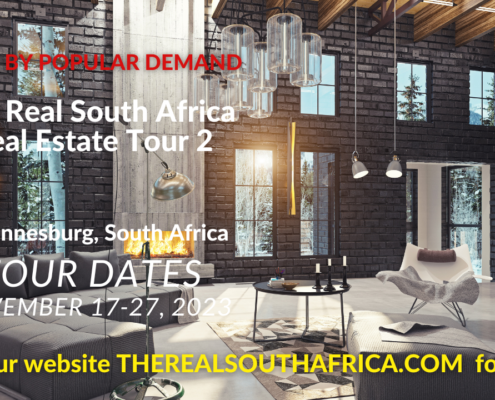 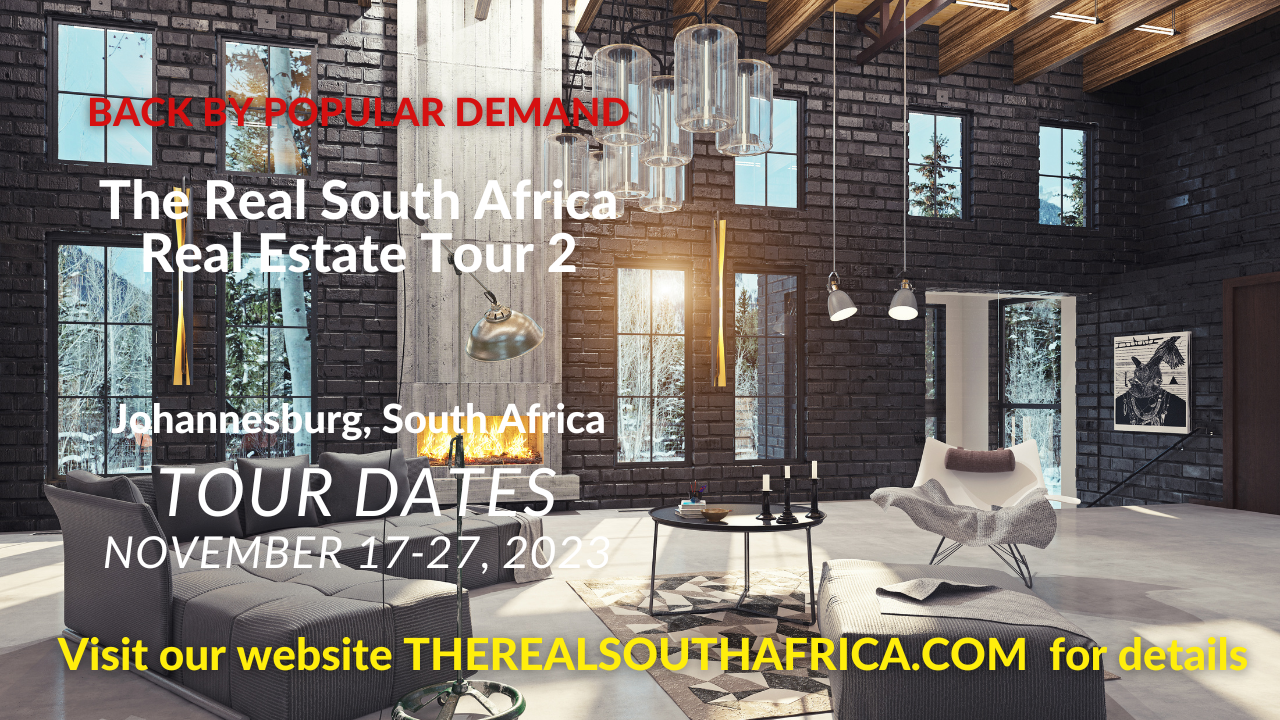 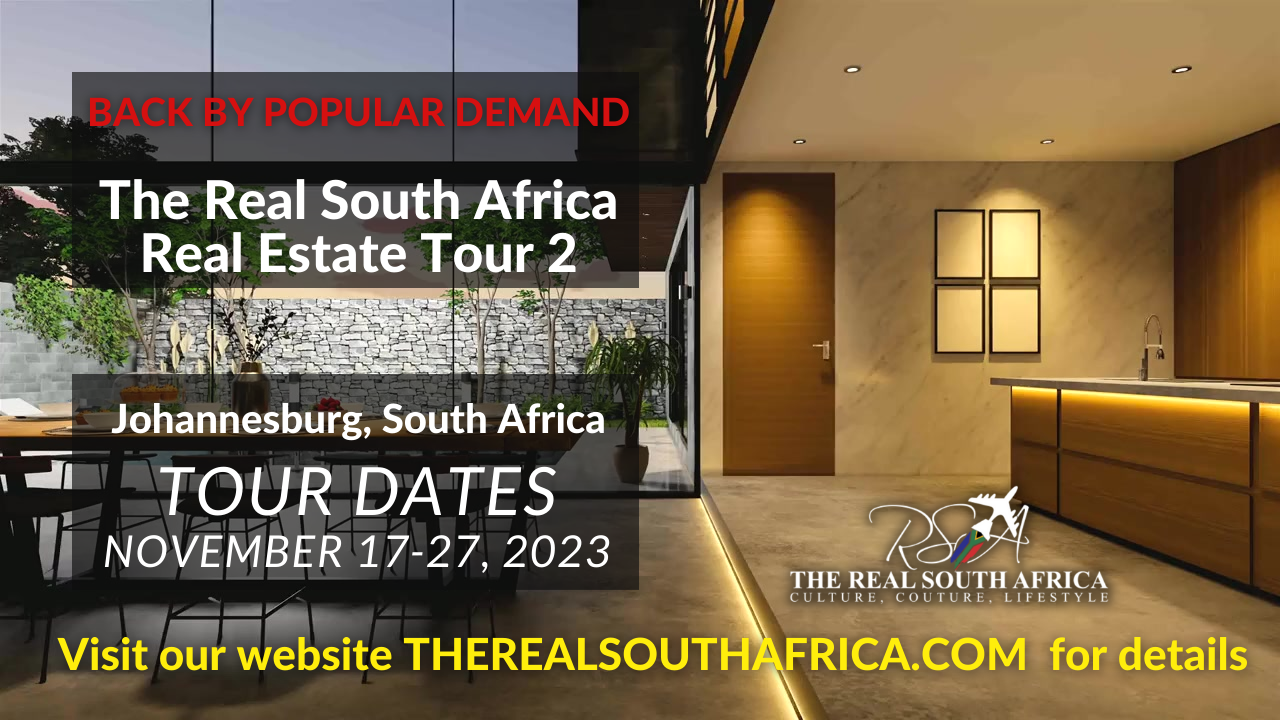 This real estate tour is one that has been in high demand over the last two years since showcasing the first home on our YouTube Channel. Interest in viewing homes and purchasing here in South Africa has only risen and The Real South Africa, with its network and connections have chosen you to be a part of this magnificent experience. You will have access to everyone involved in the purchase process in one location. This will afford you the opportunity to discover your own personal possibilities here in South Africa or change your mind about what you want and desire for your future and legacy.

So Welcome… We hope that you will leave here with something that has your name on it.

Tour Includes: All ground transportation to and from each property selected, airport transfers from and to accommodations, luxury accommodations and breakfast daily.

United States nationals need a valid passport, but no visa is needed for stays of up to 90 days.

Canadian nationals need a valid passport, but no visa is needed for stays of up to 90 days.

British Nationals need a valid passport, but no visa is needed for stays of up to 90 days if passport holder is an endorsed British Citizen including Guernsey, Jersey and Isle of Man, British Dependent Territories Citizen, or British Overseas Territories Citizen (Virgin Islands). Those whose passports state British National (Overseas) may stay up to 30 days without a visa. All others require a visa.

European Union nationals need a valid passport, but no visa is needed for stays of up to 90 days.

Australian nationals need a valid passport, but no visa is needed for stays of up to 90 days.

New Zealand nationals require a valid passport, and a visa is necessary for stays of up to 90 days.

Irish nationals require a valid passport, but no visa is necessary for a stay of up to 90 days.

Most South American countries require a valid passport, but no visa is necessary for a stay of up to 90 days.

Children will still need a valid passport and visa (if necessary) in order to travel. Passports must have at least two blank pages for entry and exit stamps.

Banks are found in most towns, and are generally open from 09h00 to 15h30 on weekdays and 08h30 to 11h00 on Saturdays (Closed Sundays and Public Holidays). Most of them offer foreign exchange services – with cash, bank & credit cards as well as travellers cheques. You can also obtain cash from automatic teller machines (ATMs). Several international banks have branches in the main city centres. Always advise your bank that you are travelling outside of the country as they might block your purchases if they are not informed.

Travel, Transport & Getting Around

Travelling around South Africa is relatively easy by air, road and rail.

Principal air routes are serviced by SAA and British Airways. There are also low-cost carriers on main routes, namely Kulula.com, Mango and Safair. Facilitating travel around South Africa are 10 airports managed by the Airports Company South Africa (Acsa). In addition, there are some 90 regional airports, including the Kruger Mpumalanga International Airport in Nelspruit and the Skukuza Airport, offering access to the Kruger National Park.

An extensive tarred road system makes travelling in South Africa by vehicle convenient and easy. You will find gravel roads in rural areas though. Please note that a valid international driver’s licence is required. We drive on the left-hand side of the road. Most global car hire firms have branches in South Africa and Uber is available.

Another means of getting around South Africa are inter-city bus services such as Greyhound and Trans-Lux. Metrobus buses are available for in-city transport. Metered taxis must be ordered by telephone.There is the popular MyCityBus system in Cape Town as well as a hop-on-hop-off tourist bus in Cape Town and Johannesburg.

Travellers arriving in South Africa from infected areas require a yellow fever vaccination certificate; otherwise no vaccination is required. There is a malaria risk in the following areas; low-lying areas of the Northern Province and Mpumalanga (including the Kruger National Park) and northeastern KwaZulu-Natal, and precautions are advised when travelling to these areas. Tap water is safe in urban areas but bottled water is advisable elsewhere. Medical facilities in South Africa are very good, but medical insurance is strongly advised as private hospitals expect payment up front and public hospitals are best avoided.

Although crime does occur in South Africa, this tends to be concentrated in pockets throughout the country, for example in the township areas and opportunistic crime can be encountered. Travelers should always be aware of these risks and exercise the necessary precautions. Doors should be locked when driving and one should not walk alone at night in city streets, isolated beaches or remote areas. Be vigilant when using ATMs and do not display signs of wealth (e.g. mobile phones, money, expensive jewellery) on the streets. It is worthwhile noting that the South African authorities do give high priority to the protection of tourists.

Standards of hygiene in relation to food health and safety in South Africa, are generally high in hotels, restaurants, pubs and nightspots. Tap water in South Africa is safe to drink and cook with when taken from taps in urban areas. Not all tap water in rural areas is safe for consumption, so take precautions if necessary.

It is safe to eat fresh fruit, vegetables and salads, and put ice in your drinks. South Africa’s fish, meat and chicken are of excellent quality, so there is no need to limit yourself when enjoying the local cuisine.

Restaurants are subject to South Africa’s food safety control legislation, which is implemented by local government. Regulations include certification and regular inspections by health inspectors to ensure hygienic standards are maintained.

Street food is not as common in South Africa as it is in other countries, although vendors selling traditional snacks and meals can be found in city centres and townships. Food safety in such instances cannot always be guaranteed.

The South Africa summer season runs from October through to March and the central winter period falls between May and July. Although South Africa’s climate is affected by regional differences, the climate is generally mild throughout the year with predominantly summer rainfall. On the whole, South Africa ranks high on the sunshine index.

The Western Cape region (including Cape Town) is the only area that has a mild, Mediterranean climate with dry summers and winter rainfall. In summer the weather in Cape Town is warm and dry, but the idyllic sunny weather can be punctuated by strong south easterly winds. Winters (June, July & August) are characterised by heavy rain, particularly on the mountain slopes, strong north-westerly winds, and low temperatures.

Bring clothes that are cool, light and comfortable because summer temperatures can get well into the 30 – 40 degree Celsius range in some areas. Also bring an umbrella or raincoat during summer as this is when most of the country gets its rain, but don’t forget a swimming costume (bathing suit).

The winters are generally mild, comparing favourably with European summers.  But there are days when temperatures dive, especially in high-lying areas such as the Drakensberg, so be prepared with jerseys and jackets. Cape Town gets its rain during the winter season so it’s advisable to bring rain gear along.

Always bring a hat, sunglasses and sunblock as the sun can be strong even in the winter months.

Walking shoes are a good idea all year-round, with warm socks in the winter.

If you are doing business in the country, business attire  (suit and tie) is generally called for in the corporate sector, but media for example generally dress more casually.

For game viewing, a couple of neutral-toned items will be useful, but there’s no need to go overboard. A good pair of walking shoes is also advisable.

For the evening, if you are dining at an upmarket restaurant or seeing a show, smart-casual attire is recommended.

Current is 220/240 volts at 50 cycles per second. A three-point round-pin adapter plug should be brought for your electrical appliances – such adapters are also available at major airports.

There is simply no word in the English language to adequately describe the feeling – so we’ve created one. Your tongue feels like sandpaper, someone is driving a nine-inch nail through the back of you skull and foggy images from the night before are crawling into memory. You slurred your life story to some degenerate at a bar, you sang “It’s Raining Men” several dozen times, and somehow, somewhere, you acquired a traffic cone. That’s right, you have a “babalas”. A nice big hangover.

After soccer, rugby and cricket, our top sport is the “braai” – otherwise known as the barbeque. It’s our favourite pastime and a huge source of merriment for the boykies (a slang name for the men). South Africans abroad have even been known to brave the blizzard and “braai” in London’s below-freezing conditions. Mad? Not as mad as missing a good “braai”.

Why appoint a designated driver when you can just crash? No, it’s not as bad as it sounds. To “crash” means to spend the night at someone’s house. It beats a head-on collision any day of the week.

Drive Alive, do not drink and drive!

Spend enough time in Cape Town or Durban and you may find yourself in a state of sleepy hypnosis brought on by fresh sea air or magnificent mountain vistas. If this happens, don’t be concerned. It is a common garden variety “dwaal”. Some call it a daydream; others: The Thousand Yard Stare. Whatever you call it, when you are caught staring at a total stranger; the safest response is: “Sorry, I was just in a dwaal”.

They say that Eskimos have sixty-four words for snow, which makes perfect sense. Their countries boast vast expanses of frozen water and lots of polar bears. In South Africa we have a similar phenomenon. We have countless words to express that which is good, or cool, or exciting, or beautiful; among them, “kief”. Sunny weather; sandy beaches; exotic wildlife; beautiful people – we’ve got more positives than a 12 volt battery. And we can’t help talking about it.

More serene than the Dalai Llama, more forgiving than Ghandi, more eloquent than Churchill . . . To us he is our history’s miracle; our national treasure; our most bankable export. You may call him Nelson Mandela, but he is our grandfather: “Madiba”

No, this has nothing to do with charity work. That’s “missionary”. Being on a “mission” could be as important as delivering high-level documents to Government or as menial as grabbing a cup of coffee.

The Afrikaans translation of the “flat land” is what we call parts of South Africa that are, you guessed it, flat.

A good-for-nothing. Ne’er-do-well, slob, slacker or loser. In other words, your average Mr. Wrong.

What do I need to bring?

Every country in the world displays some diversity, but South Africa, stretching from the lions in the Kruger National Park to the iconic Table Mountain in the Cape, takes some beating. Enjoy the Country’s sweeping valleys of the Winelands, Cape Town’s jumping nightlife, Namakwa’s springtime symphony of wildflowers or KwaZulu-Natal’s iSimangaliso Wetland Park which alone has five distinct ecosystems, attracting both zebras and dolphins – there is something here for any person with any interest of any age. Although the country has its fair share of problems, South Africans are some of the most upbeat, welcoming and humorous folk you’ll encounter anywhere, from farmers in the rural north who tell you to drive safely on those dirt roads, to Khayelitsha kids who wish you molo (‘good morning’ in Xhosa).

There are no reviews yet. 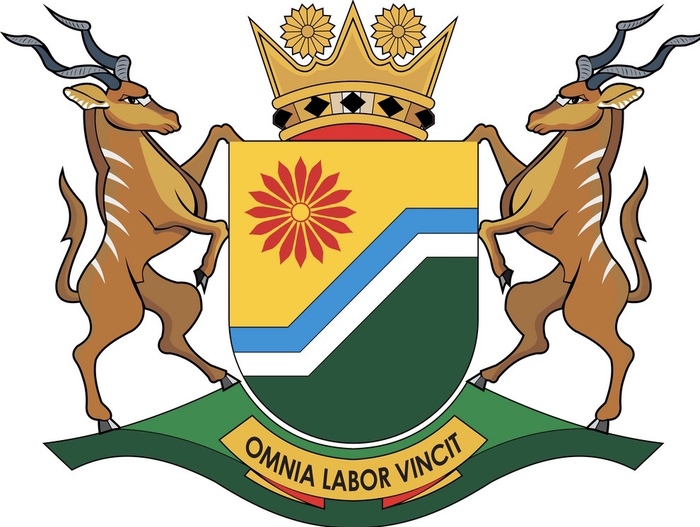 MpumalangaStarting at $2499.00
To get started select from the following three options. 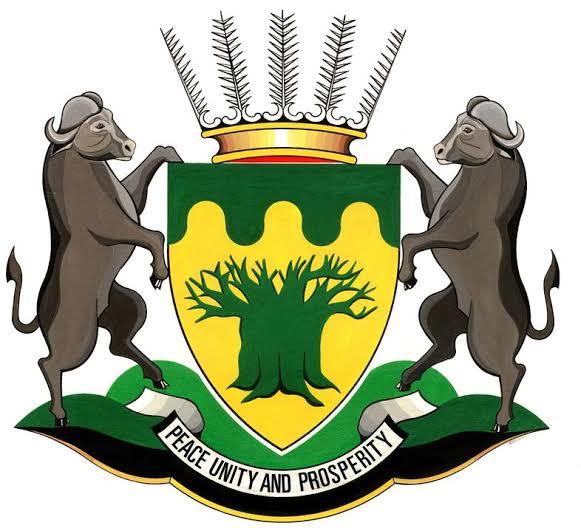 LimpopoStarting at $2179.00
To get started select from the following three options. 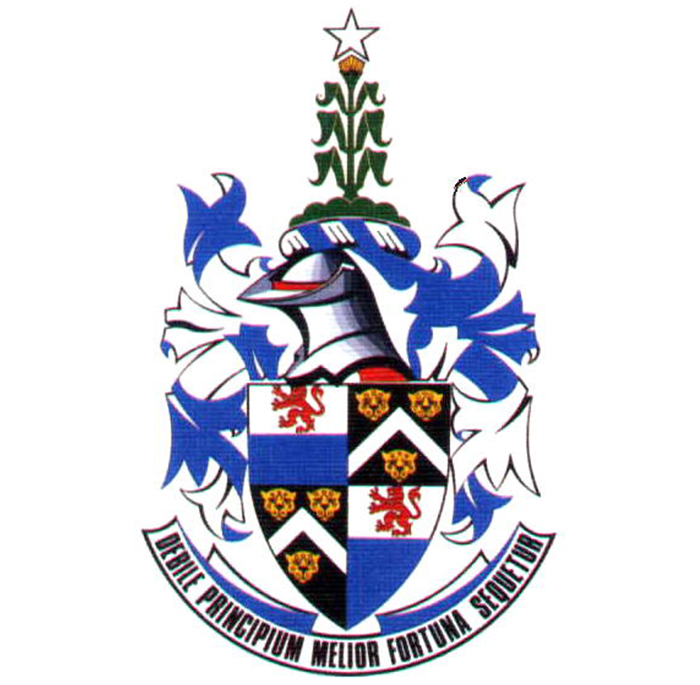 DurbanStarting at $2685.00
To get started select from the following three options. 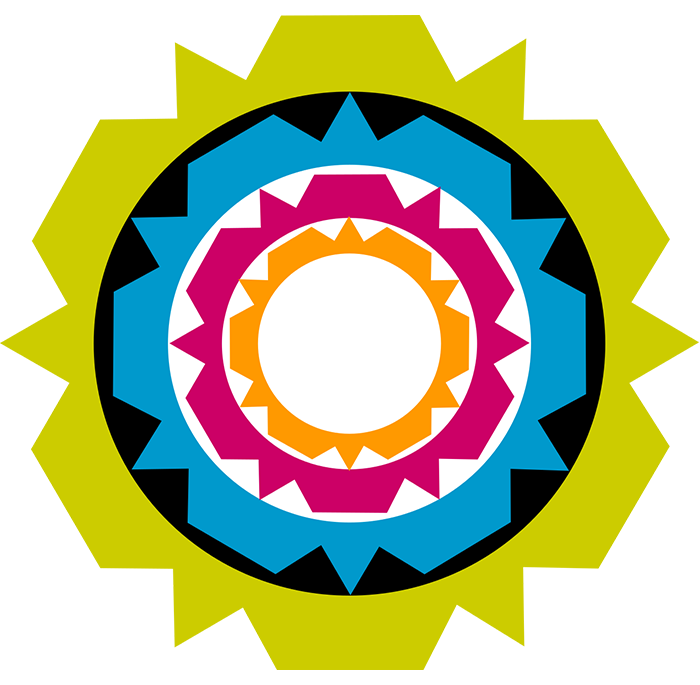 Cape TownStarting at $3,470.00
To get started select from the following three options. 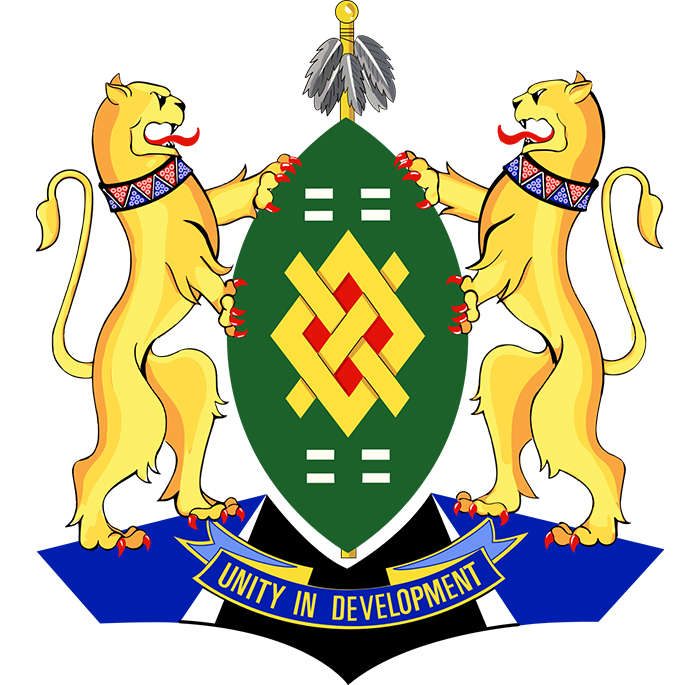 JohannesburgStarting at $3275.00
To get started select from the following three options.